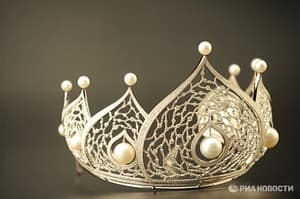 Since 1993, The Miss Russia Pageant is being organized and between then and now it has given the world a Miss Universe and two Miss World winners (one of whom was, sadly, later dethroned). At present, however, the pageant has a new claim to fame and the item is —the most expensive beauty pageant crown in the world.

The latest and the costliest Miss Russia crown was unveiled at Imperial Park Hotel & SPA, just outside the city of Moscow, and was presented to the 2010 pageant winner when the results were announced on March 8th. The Yuvelirny Teatr jewelry house is the exclusive creator of this beautiful crown. This exquisite crown is made of 18k white gold, bejeweled with 2,358 diamonds, totaling 62 carats and 14 pearls, the primary of which is an enormous 19 mm.

Though the crown is regarded as the most expensive crown of the world, the price tag is still unknown to the public.