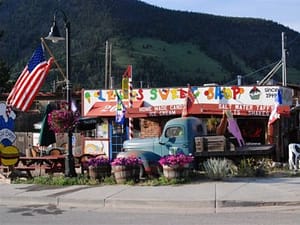 Hundreds of thousands of people each year warily pass through Empire on their way to or from the ski slopes and hiking trails of Winter Park or Rocky Mountain National Park. The speed limit on US Highway 40 in Empire drops down to 35 miles per hour — 25 mph during school start and end hours. Most motorists creep through town and keep going. Others find flashing lights in their rear-view mirrors and want nothing more than to get out of town.

What they’re missing is a surprising variety of dining options from an old-fashioned seasonal soft-serve ice cream stand to elaborate wine dinners.

Fill up with a hearty breakfast on the way to the slopes with a stop at the Hard Rock Café. This is no rock music-themed adult playpen. This original Hard Rock Café opened in 1934, is named after the hard-rock mining (silver, gold, copper) in the area and won the right in court to keep the name.

Judging by the size of the servings, the operators think they’re still catering to hard-working miners. Breakfast is the best meal of the day at the Hard Rock with overflowing plates of egg dishes, spicy chorizo, thick bacon, home fries and pancakes the size of a hubcap. Walk around the century-old building and belly up to the bar to really feel like you’re in the old West.

A half-block north, Jenny’s Restaurant offers affordable classic breakfasts, lunch and dinners. In the afternoon, go for the soups or other daily specials made on-site. A recent bowl of vegetable soup turned out to be anything but simple with ample rough-cut veggies, flavorful broth and fresh herbs all in a satisfying bowl of goodness with warm rolls on the side. Follow it with a slice of pie that will make you say, “grandma, can I have some more?” The blueberry pie this summer was plate-licking good.

Read the menu at Jenny’s closely. Not for the food selections but for some history about the town and the restaurant. The historically decorated building has retained its original century-old name even though it turns out the first owner wasn’t really named Jenny after all.

On the way back to Denver after a day on the trails, stop by the Empire Dairy King or Lewis Sweet Shop for a kid-friendly side-of-the-road afternoon treat of ice cream or more — burgers, hot dogs, pulled pork sandwiches. Lewis’ is as much visual entertainment as it is refreshment with an eclectic collection of hand-painted signs, odd flower pots and an old truck crammed into the front yard.

Then come back one evening for a meal at the historic Peck House, the oldest operating hotel in the state. Many of the antique furnishings throughout the hotel traveled on oxcarts with the Peck family in 1862.

Dinners at the Peck House can be special affairs — occasional wine dinners or seasonal special menus based on what’s available fresh. The standard menu retains a sense of tastes and available products in 19th Century Colorado with several beef and chicken dishes as well as trout, quail, duck and Mrs. Peck’s Beef and Oyster Pie.

For more information about Empire and its restaurants, go to www.clearcreekcounty.org.

One Response to Speed Trap Specials :: Dining in Empire, Colorado