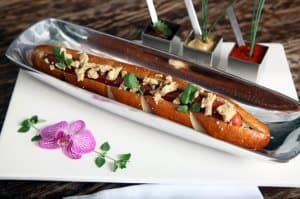 The most expensive hot dogs are limited editions that were only available at Stockholm just for a few days. You need to be lucky enough to have a taste of those great hot dogs. Though they do not appears something as very special compare to their street counterparts. To taste one you need to shell out almost 999 Swedish kronor that mean that almost $130 USD. The pricey hot dogs were part of a United Nations scheme to emphasize global poverty. The idea was that, “for one of the billion people worldwide who live on less than a dollar a day, paying the standard price of a hot dog would be like your average, comfortably living individual paying $130.”

These expensive hot dogs were available from September 2005, from the Nordic Office of the United Nations Development Programme. They were sold by many Swedish politicos and celebrities. You might have missed the chance. However, you can taste the expensive hot Dog in New York.