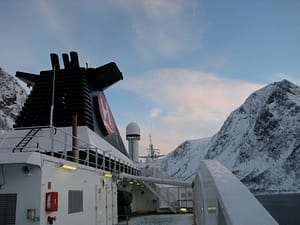 It’s still summertime and the livin’ is hopefully easy, but it’s also a good time to plan your winter getaways. Last February, I went on a 1,232 mile Northern Lights Cruise in Norway with Hurtigruten, and it was one of the coolest trips I’ve ever been on — in more ways than one! The six-day Hurtigruten cruise was aboard the MS Polarlys, which would make 32 stops along the way, taking us along Norway’s west coast from Kirkenes south to Bergen.

I wasn’t familiar with Kirkenes, located 240 miles north of the Arctic Circle near the Russian-Norwegian border. On the two-hour flight from Oslo, the cityscape below quickly morphed into beautiful fields of snow and ice. For two days prior to the departure of the Polarlys, I went dogsledding, kick-sledding and floated in a fjord in a waterproof flotation suit. And also dined on reindeer meat with plenty of Aquavit!

The MS Polarlys is not your typical cruise ship, but a working ship. Built in 1996, it’s stylishly furnished with mahogany paneling, polished brass and Norwegian contemporary art. Its 482 berths are compact and cozy, with no TV’s, although the Nature Channel is right outdoors. Other amenities include a small workout room, 24-hour cafeteria and an Internet Café. And of course lounges and dining rooms, with no shortage of tasty food on board. The ship holds 50 cars and plenty of cargo, and drops off and picks up goods along the route. In the “old days,” it took three weeks to go from Hammerfest to Bergen. Now it only takes three days.

Although some of the ship’s stops are a quick 15-minutes, others give you ample time to stretch your sea legs and explore. Out ports of call included Hammerfest, where a light snow was falling as we disembarked; Oksfjord, home of the majestic Oksfjord Glacier; Svolaer, where we quaffed fruit flavored vodka out of ice glasses; and Tromso, a university town where a few of us decided to spend an evening singing karaoke (we didn’t win any prizes).

Along the way, the scenery is stunning, including the spectacular Seven Sisters looming high above the isle of Alsten. My favorite way to watch the passing parade of sights was wrapped up in a blanket in a chair on the aft deck.

The ship itself is a lot of fun. It’s a virtual “floating gallery,” complete with 100 paintings, all by Norwegian artists. Don’t be surprised to find passengers sleeping in the library — it’s “legal” for those going from one town to the next. This is more of an upscale ferry than a cruise ship, and therein lies the charm.

One of the highlights for me was Trondheim, where my father’s parents hailed from. I signed up for the shore excursion, where a motor coach took us to Utsikten for an overview of the second oldest town in Norway, finishing with a visit to the Gothic-style Nidaros Cathedral. The cruise concluded in the beautiful city of Bergen, my favorite in Norway.

And what about those Northern Lights? Yup! We saw ’em!

One Response to Cruisin’ in Norway with the Northern Lights