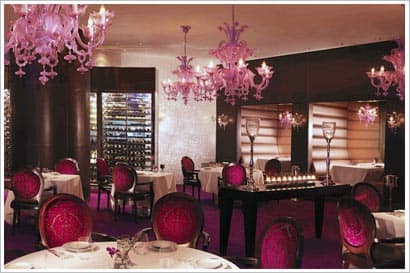 If Ferran Adrià is extensively considered as the Father of Molecular Gastronomy, then Pierre Gagnaire is of course the Mad Scientist. His alliances with Hervé This, a Collège de France canvasser on molecular interfaces has been well renowned: such is Gagnaire’s steadfast binder to making gastronomy that staggers everyone, including himself.

In opening Reflets par Pierre Gagnaire at the InterContinental Dubai Festival City – his sixth restaurant to date – Gagnaire endeavors to bring his trade name of experimental cookery to diners in the Middle East. But perchance, the restaurant’s name divulges a trace to Gagnaire’s exact purposes for his Dubai outpost.

Mirrored corridors, mother-of-pearl walls, Murano glass chandeliers and baroque furnishings bring to mind his first Parisian founding at rue Balzac while convolute arabesque motifs on wallpapers and velvety rosewood Louis XIV chairs anchor Reflets in its Middle Eastern environs. This situates the stage for diners to ponder their dishes, and echo on the detonation of senses they have just experienced.