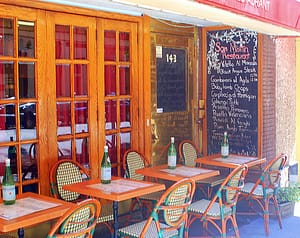 Manhattan is so full of wonderful little neighborhood restaurants that it’s impossible to find and try them all. When I lived there, I’d wander the cross streets and duck into little 10- or 12-table bistros then wobble out an hour or so later sated and thinking I found my new favorite place … until I found another the next day.

A recent trip back to New York led me in similar fashion to some new finds:

Epistrophy Café. 200 Mott Street:
After hours of pushing through the Saturday crowds in Little Italy, Chinatown and Soho, we were exhausted and somewhat cranky. Balthazar had its usual two-hour wait while the Little Italy restaurants that churned through tourists and red sauce held no appeal.

But an unplanned right turn from Spring Street onto Mott when the light changed led us to four light green tile-topped sidewalk tables in front of this sweet Italian bistro. Away from the throngs of people, we sat in the shade, sipped an excellent house Pinot Grigio and nibbled on appetizers, the best being the Taglieri or sampling plates. They come in three sizes and varieties: meat and cheese, vegetables and cheese, fruit and cheese. After another glass of wine, we were re-invigorated.

San Martin Restaurant. 143 East 49th Street:
This is one of those small, comfortable neighborhood bistros found throughout New York — take a few steps down from street level, walk past the bar on a well-worn wood floor, chat with the waiter a while then enjoy authentic New York Italian food with a few Spanish dishes thrown into the mix.

The dessert list is longer than most, making it troubling to select just one. But ordering the last offering on the list, called “EST … EST … EST” produces a sampler plate of tiramisu, cheesecake, apple tart and more for two to share.

Amarone. 686 Ninth Avenue:
This bistro is a great place for a light mid-afternoon meal and people watching in New York’s Hell’s Kitchen neighborhood.

Service is a bit scattered during the day, but it’s offset by the decent wine-by-the-glass list that includes a lovely dry prosecco perfect for a warm afternoon. The bottle list includes several versions of the restaurant’s namesake Amarone, a powerful wine made from funny-shaped grapes in northeastern Italy

The menu offers a variety of light salads, including the restaurant’s special eggplant fritters with mesclun salad and goat cheese. A simple green salad was fresh and full of flavor; the carpaccio was melt-away tender.

Dinner entrees include a few offerings made with the Amarone wine, including an intriguing risotto.

Delta Grill is primarily a noisy neighborhood pub with a couple inventive chefs in the kitchen. The crab cakes are heavenly, tasting of crab instead of cracker crumbs, seared to a golden crunch on the outside and served with an inspired caramelized apple and onion tartar sauce. The alligator and smoked pork sausage is “more andouille than gator,” according to the waitress, but spicy and interesting nonetheless.

The kitchen will blacken anything: filet mignon, chicken, the previously mentioned tofu and even yellowfin tuna (served with cheese grits and portobello mushrooms in a pernod sauce).

Trattoria Trecolori. 254 West 47th Street.
After-theater dining in Manhattan’s Theater District always makes me nervous. Too many people cramming into a handful of restaurants to loudly chatter about what they’ve just seen over marginal food.

Trattoria Trecolori breaks out of that stereotype if you ignore the menu. Instead, just listen to the long list of daily specials that have been simmering and poaching and baking all day. A recent chef’s special included five biscuit-sized ravioli stuffed with cheese and broccoli rabe in a spicy vodka sauce.

Artisanal. 2 Park Avenue:
This isn’t a new find, but a renewed love affair. When I lived in New York, I stopped by Artisanal at least once a month. Now, when I return for a visit, a night of cheese and wine at the Murray Hill restaurant is a must.

Forget the big dining room and its long menu — grab a seat at the bar. Order the fondue of the day or any one of the cheese sampling plates and start talking to the bartenders. They’ll recommend wines for individual cheeses, suggest an interesting alternative to something commonplace, offer several samples based on your tastes, become your friend and your teacher.