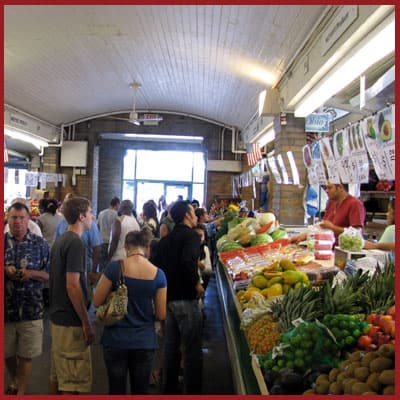 …and YES, I WOULD WANT TO LIVE THERE!

Cleveland may not be on your top 10 list of where to go for your next Culinary Adventure– maybe not even on your top 50 list…but that would be a BIG “Pretty Woman” sized mistake on your part. (Don’t feel too bad, it wouldn’t have been on my list either– until I visited there last week for an incredible eye & palate-opening Gourmet Tour.)

To set the record straight, Cleveland’s sooty past is just that, a thing of the past, because Cleveland has worked very hard to clean up its act. The phrase that kept running through my mind as I was exploring the city’s streets was “How Civilized!” For example, I couldn’t believe how clean the city was. I learned that the Downtown Cleveland Alliance not only hires “Clean & Safe Ambassadors” to power wash the sidewalks and keep the buildings graffiti-free, but they also will provide a free after-hours escort to safely walk you to your car. Now that’s what I call civilized (and smart,) because it can’t help but contribute to C-town‘s sizzling restaurant scene, because this place is HOT, HOT, HOT with stylin’ new restaurants springing up in mini-culinary nabes all over town. Bistros, gastro-pubs, ethnic eateries, and chef driven smaller sized restaurants are flourishing, particularly in the historic Warehouse District, the West Side’s gentrified Tremont area and “The Flats” down on the Cuyahoga riverfront.

1. The West Side Market: this historical indoor-outdoor marketplace specializes in ethnic food, from Italian pastries and Amish yogurt cheese, to Lithuanian sausage and stuffed grape leaves. Blue-haired grandmas rub elbows with blue-haired hipsters stocking up on local produce and exotic specialty foods available at amazingly affordable prices. This 1913 market features a graceful clock tower and beautiful Neo-Classical/Byzantine Style building and houses over 180 food stalls.
While talking to Chef Timothy over breakfast one morning at Muse in the Ritz Carlton (more “Musings” later) he told me to be sure and search out his fave market vendor, Maha’s , which is hidden away in the back corner. Order their world- class fallafel loaded with lettuce, tomato, tzatziki, crispy fried falafel, and the not-so-secret ingredient — hot sauce. Be sure and grab a handful of napkins for this messy delight.

3 Responses to Cleveland: A Great Place to Visit…