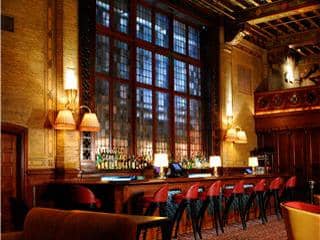 Although it’s been around for a while, since it’s well hidden in a corner of Grand Central Station, many people still haven’t had drinks at The Campbell Apartment, which is a crying shame. Maybe because you need a treasure map to find the place– hidden deep in a corner of Grand Central Station. Sure,the cocktails are overpriced, and there’s an unbelievably strict dress code and the door-nazi’s have SERIOUS ATTITUDE, but you still should go. Why? Because  when you  walk in you feel like you’ve been transported back to another era.
Originally the space was leased by John W. Campbell in 1923, owner of Grand Central. He used it for his ( ultra luxurious) office, not an apartment. After his death, it spiraled down until it hit rock bottom as a storage unit for the transit police to store their weapons. Lucky for us, it’s been restored to it’s previous glamour with extensive dark carved wood, atmospheric blood-red leather chairs, gorgeous leaded windows, a 25-foot high beamed ceiling, a massive fireplace, and all sorts of intricate architectural details.
I think they probably time-machined in some bartenders from the good old days because they sure know how to make a cocktail. Two popular concoctions are the Prohibition Punch– Estate Rum, Grand Marnier, Champers and passion fruit juice and the Flapper’s Delight–a bubbly froth of champagne, papaya juice and amaretto, will leave you  yearning for Sam to Play it Again.