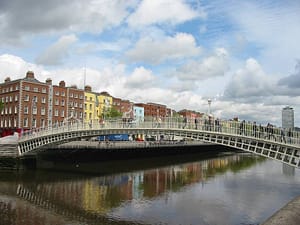 How to Get There:

Set the mood by flying Aer Lingus, Irelands #1 airline. The flight crew were pleasantly attentive and when I asked for a blanket, I actually got a smile and “I’ll bring it in a jiffy, luv.” The plane was clean and quite roomy, with individual tv’s, and the hours sped by as I watched the whole first season of “Mad Men,” on the new non-stop flight from SFO to Dublin.

I would highly recommend either one of my hotels. Both were conveniently located on St. Stephen’s Green– walking distance to Grafton Street, Trinity College and many other key sites in Dublin.

The Shelbourne, a leading international luxury hotel, was originally built in 1824. They recently completed a a magnificent restoration, managing to keep its historic charm and grandeur intact, while updating to supremely comfy big beds and even bigger marble bathrooms with Kohler appliances. One perk is that this grand old hotel has one of the hottest bar scenes in town, perfect for hours of people watching..

The Fitz is just what you would expect from the Sir Terrance Conran’s Design group: low-key elegance, sleek and sophisticated minimalism, yet no creature comforts have been overlooked. Even though The rooms are not overly large, they are beautifully appointed with a set-up for tea/coffee, music player (CD library available), ipod docking station, sitting area, plasma TV, plush robes, even outside heat lamps for keeping toasty on your private balcony. And the perk here is that you’re only steps away from Thorton’s.

Of course, they are going to trot out one of their top guides for a press trip, but the good news is that he also freelances, so you can ring him up. Not only is Ken McElroy a true gentleman, but there was absolutely nothing the man didn’t know about Irish literature and history. His impromptu stories, poems and songs interspersed along our tour brought Ireland’s past to life.

One of Dublin’s best kept secrets for Modern and Impressionist art. The collection includes masterpieces by Monet, Renoir, and Degas as well as the largest collection of 20th century Irish art. Don’t miss the incredible Francis Bacon Studio that has been painstakingly transplanted and reassembled, down to every 1/2 used tube of paint, crumpled scratch paper, and speck of dust from its original site in London. It took three years and a team of 10 archaeologists to dismantle the room and transport the contents across the Irish Sea.

Set in a restored 18th century townhouse on Parnell Square, an hour’s visit provides a good introduction to those less familiar with Dublin’s impressive list of authors and poets, such as Joyce, Shaw, Yeats and Pearse. Exhibits cover everything from the first Gaelic translation of the Old Testament to modern classics with an impressive array of photographs, first editions, personal letters and other memorabilia.

Other Useful Web addresses:
General info: www.discovernorthernireland.com
All about the local food: www.goodfoodireland.ie
Where to stay, eat and drink: www.ireland-guide.com