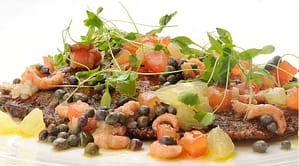 What can you say about a guy who was the youngest chef to collect three Michelin stars. Well for me, you would not say much because you’re not so much the Michelin star kind of cook, but would head more towards a Jamie Oliver restaurant. What changed my mind slightly was watching Marco Pierre White as a judge/coach on the Masterchef Australia – the Professionals. He walked into the room and all of the contestants were in shear awe of this man. He has the reputation of actually making Gordon Ramsay cry. Ramsay, along with many others, including Curtis Stone learned some of their craft from MPW. That is how I will refer to him from now on…

So without further babbling I absolutely had to try one of his many restaurants in London. I convinced a friend to splurge with me and the experience is something we will both always remember. We decided to share the potted duck starter and beetroot/goats cheese salad. Scrumptious!
For a main I had the Tuna steak which was seared to perfection, with a nice peppery rocket and cherry tomato salad (what can I say I like salads), drizzled with olive oil. I finished the meal with the Italian sorbet selection and it was stunning.

The meal itself was not too bad at £95 (neither of us drank). Sadly MPW did not make an appearance, but I will keep my eye out for him. If you’re interested in learning more about him, simply search him on the web. He is known as the godfather of modern cuisine, also check out his website – http://www.marcopierrewhite.org. The guy has some klout in the culinary world.