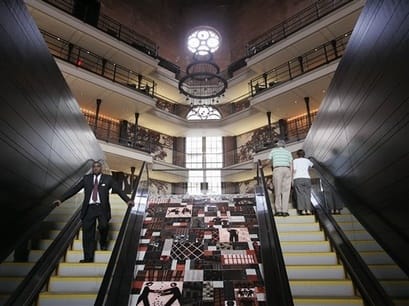 The Liberty Hotel is a perfect storm of all the elements you would expect from a historical landmark turned luxury hotel. The Liberty Hotel is ideally located in the heart of Boston’s Beacon Hill neighborhood near just a stones throw from the Charles River and its Esplanade.

What was once the Charles Street Jail is now a hotel that is beyond compare to anything in Boston. After two years of renovations the hotel opened in September 2007. If there is a movie being filmed in town chances are the cast and crew will make an appearance in one of the venues, whether it be Scampo or Clink. I felt rather fortunate to have stayed in some snazzy places, but I feel confident it will be quite some time before anything will rival the entrance and lobby at the liberty. They have done an impeccable job at retaining the architectural nuances of the old jailhouse and complimenting them with new elements that provide the necessary amount of continuity. This enables the hotel to house more than 290 rooms, beyond the original jail space and into a new tower.

They have done a top notch job on the conversion that goes beyond just any old theme hotel. Their play on words is rather witty and used in a fun way that ads a whimsical feel.