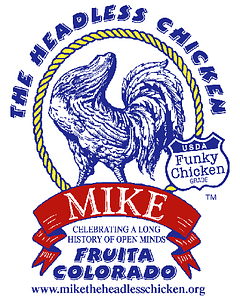 Festivals abound celebrating the various culinary incarnations of the chicken – fried, roasted, broasted, grilled and so forth. But the tiny town of Fruita in western Colorado this weekend celebrates a chicken who, according to legend, lived 18 months after having its head cut off.

Mike the chicken lost his head to a farmer’s ax in 1945 but managed to keep his brain stem, jugular vein and one ear intact. The bird’s determination, will to live or just plain pluckiness has drawn admirers to Fruita for the past 11 years when the story of his survival was re-told.

The chicken’s survival made news and turned the bird into a sideshow attraction. Olsen reportedly kept Mike alive by feeding him ground grain and drops of water through his esophagus, and using a small syringe to keep the passageway free of mucus. The bird tried to crow, but only gurgled.

Mike’s story faded into legend after the bird finally died, but resurfaced when the town of 11,000 started looking for ways to promote itself. The festival has grown to include a mountain bike race, marathon in nearby Colorado National Monument, music, artwork, petting zoo and chicken-related events like a wing-eating contest and egg toss.

For more details, go to www.miketheheadlesschicken.org.