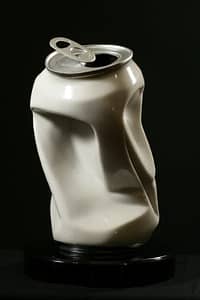 Robin Antar’s work under the name of Antar Studios inc. has made known her work as “Realism in Stone.” Antar’s work comprises mostly of commonplace objects such as denim jackets, potato chip bags, tubes of toothpaste and even M&Ms bags rendered in stone. Antar’s “Soda Can” appears to be the most expensive soda can in the world. However, you cannot drink from it. These simply awesome stone carvings will certainly catch anyone’s imagination and appear like the original one.

This pricey can is carved from a single piece of marble, finely polished and capped with a sculpted, silver-painted lid that lends it the original look. Antar chose to carve a slightly crushed can rather than an uninteresting, perfect can. The size is 10” by 18”; it is certainly not the biggest of Antar’s huge works. However, it is still bigger than a regular soda can. It weighs in at 150 lbs.