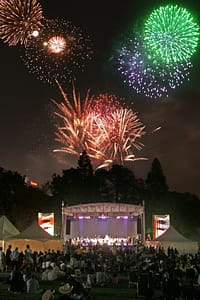 If you still haven’t made NYE plans you really gotta get cracking. I’d suggest celebrating in style
in one of the worlds most stunning settings at Niagara Falls’ New Year’s Eve bash. “Party in Niagara” is organized annually by the Niagara Parks Commission, and the Niagara Falls New Year’s Eve event planners provide party-goers with an outdoor alcohol-licensed area, food and drink stalls, and spectacular fireworks over the Niagara Falls waterfalls at both 9 p.m. and midnight.
Plus the EVENT IS FREE! Held annually in Queen Victoria Park, it attracts around 30,000 people each year. Be sure to stop by Clifton Hills, the major tourist promenade in the town of Niagara Falls, where local and international musicians perform. This year’s entertainment will include performances by former Supertramp singer, Roger Hodgson, along with Kim Mitchell and Justin Hines.

If you’re temped but don’t like the cold, then imagine yourself toasting in the New Year
as fireworks light the sky over Niagara Falls just outside your window.
That’s just part of what happens when you take advantage of Marriott Niagara Falls Fallsview Hotel & Spa’s special NYE package.