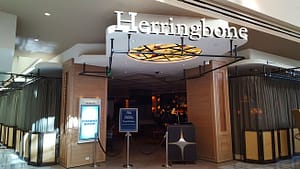 Herringbone has now a dazzling new location at Aria Resort.

In its desert home at Las Vegas, the grand Aria is famous for its intricate combination of restaurants and cuisines of various origins.

It is home to the timeless Italian cuisine Carbone restaurant and to the Corner View : cafe for exquisite breakfast. It has a nightclub and a theatre in which Cirque Du Solei performances are commonly hosted.

Aria is both a Resort and Casino filled with cherishable experiences of the delicacies to top on the entertainment filled adventure.

Herringbone has a sweet motto and vision of fish-meats-field which is well established and customized by its creative chef Brian Malarkey into its each home and its native environment and taste. Chef Malarkey is known to have a culinary playfulness which he embodies into the restaurant’s grander plan of ocean to table experience.

Complementing the distinctive cuisine will be a selection of whimsical cocktail specialties like the Tiki Bandwagon with Bacardi Maestro de Ron, Atlantico Reserve, Art in the Age Snap, orgeat, lime juice, and chocolate bitters and the Watch Your Step with Barsol Pisco, Celement Mahina Coconut, habenero shrub, yuzu juice, turbinado syrup, and blackberry. Tableside cocktail service for those looking to invent their own cocktail creations will also be available, and include a wide variety of 375ml liquor bottles served alongside fresh juices such as cucumber, grapefruit, ginger and mango. A thoughtfully composed wine list will spotlight international varietals served by the glass and offer classic, avant-garde, and organic selections available by the bottle. Rounding out the beverage program will be a host of craft beers and, for those looking for a punch of flavor without the alcohol, a variety of fresh juice mocktails.

Conceptualized and designed by acclaimed designer Munge Leung, Herringbone Las Vegas has a unique dining experience to visitors with lounge seating which become iconic in its range. The interior and exterior of the restaurant has a open and closed combination with its creative seating of various mixtures of places to create a social dynamo to let its visitors a new exposure with new people to interact with. The sweeping 5,500 square foot patio will feature covered cabanas as well as traditional tables surrounded by a lush garden landscape, bringing the restaurant’s locally sourced ethos to life and providing the ideal backdrop for a spirited al fresco meal.

Herringbone is located on ARIA’s second level promenade and will be open for lunch and dinner daily, with weekday Oyster Hour, live music events, and weekend brunch to follow. To make reservations (which they are currently now accepting), sign up for insider information, news and announcements, visit Herringbone online. Guests also can stay informed about the latest news and happenings by following Herringbone Las Vegas on Facebook, Twitter and Instagram.

ABOUT HERRINGBONE
Serving a menu of “fish meats field,” Herringbone features farm fresh cuisine with an emphasis on line-caught seafood and quality meats. The restaurant first opened its doors in San Diego, CA’s coastal community of La Jolla in spring 2012, followed by a second location in Los Angeles in 2014 and a recently-debuted third location in Santa Monica, CA this summer 2015. Since the opening of its flagship location, Herringbone has been awarded “Best New Restaurant,” “Best Atmosphere” and “Best Chef” by La Jolla Today and “Best Design/Atmosphere” by San Diego Magazine, and was named one of two San Diego restaurants in OpenTable’s “Hot 100 Spots to Dine in America” list in 2013.

Offering a dynamic collection of curated experiences, ARIA is home to restaurants by award-winning chefs Julian Serrano, Michael Mina, Shawn McClain, Mario Carbone, Jean-Georges Vongerichten and Brian Malarkey; the tranquil Spa & Salon at ARIA; Zarkana by Cirque du Soleil; and the Forbes Five-Star, AAA Five Diamond ARIA Sky Suites. Combined with its unparalleled offerings including the luxurious Shops at Crystals and the first-of-its-kind public Fine Art Collection, ARIA sets the bar for a new generation of resort experiences. ARIA and its neighboring properties within CityCenter are a joint venture between MGM Resorts International (NYSE: MGM) and Infinity World Development Corp, a subsidiary of Dubai World. For more information and reservations, visit ARIA.com, call toll free at (866) 359-7757 or find us on Facebook and Twitter.