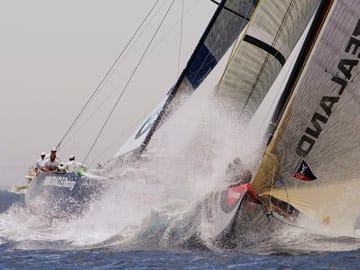 Although it sounds like a Nasdaq stock, the Louis Vuitton Pacific Series (LVPS), is actually a new regatta that will be held in Auckland, New Zealand. Twelve teams* from around the world – including U.S. team BMW Oracle, Emirates Team New Zealand, and Swiss Team Alinghi – will participate in the two-week competition from January 31 – February 14, 2009.

Sponsored by Louis Vuitton and co-hosted by the Royal New Zealand Yacht Squadron, the New Zealand government, Emirates Team New Zealand and Auckland, the LVPS offers sailing enthusiasts, fans and visitors a world class competitive event – in advance of an announced date for the next America’s Cup – and the opportunity for dedicated sailing teams to get back in the water. The winning team will receive a LV trophy specially designed for this event. ( Whadduya mean–no matching luggage?)

If you’re more a Doer than a Watcher, travelers visiting the city have plenty of opportunities to get on the water with commercial and private charters. SailNZ, based in the Auckland viaduct, has two former America’s Cup yachts, NZL40 and NZL41, that sail on the inner harbor and Hauraki Gulf – giving boating novices a chance to crew the ultimate in racing yachts.

Or if you’re more a Drinker than a Doer, Waiheke Island is a popular day trip destination that has earned international visitor acclaim for its distinctive blend of laid-back island living, fine dining and award-winning wines. About a 40-minute ferry ride from Auckland, “The Island of Wine’s” 30 vineyards produce some of New Zealand’s top Cabernet Sauvignons.

*The 12 teams announced today to be competing in the LVPS are: