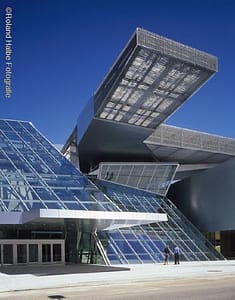 After my first visit to Cleveland I became one of their biggest fans…I know–it came as a complete shock to me also, that there is so much to see,do and eat there! They just came out with a list of the top 75 ( yikes..I don’t know if if San Francisco even has 75!) Cleveland’s best.

1. Our appreciation of the arts continues to grow. In 2007, the Akron Art Museum (pictured above)reopened to international acclaim after a $37 million expansion and renovation. Now the Cleveland Museum of Art (CMA) is in the midst of a mega-expansion that will allow more of its mega-collection to be displayed. CMA is one of the top five museums of art in the nation, featuring free admission to the permanent collection.

2. We’re proud of our sell-outs. Voted MLB’s best ballpark by fans in a 2008 Sports Illustrated fan poll, Progressive Field had 455 consecutive sell-outs. This and the fact that most of the fans stayed for all seven innings of a recent home opener before it was called for SNOW proves that Tribe fans are the most loyal in baseball.

3. We’re always ready for some football. Once a year, gridiron greats gather to honor their own in the Ohio town that is the original home to the National Football League: Canton. The city that’s football crazy year-round throws the best ten-day pigskin party anywhere.

4. Approaching light speed…that’s how we roll. Not a rocket scientist? Don’t worry. You can still reach for the stratosphere on Cedar Point’s Top Thrill Dragster. The “Rocket Coaster” launches you from 0 to 120mph in just four seconds, climbing 420 feet.

5. Clevelanders love precious gems. That’s why we enjoy rest and relaxation in our “emerald necklace,” a network of 16 reservations across 22,000 acres that includes walking, bicycle and horse trails, parks, picnic areas and golf courses.

6. We haven’t been crowned champs yet, but we have a “King” leading the way. The 2008-09 Cleveland Cavaliers are on pace for their best-ever winning season and are still undefeated at home.

7. There’s something fishy here. You can skip the fishing trip to Canada because Lake Erie is known as the “Walleye Capital of the World.” And, there’s no need to head west, there’s fly fishing for Steelhead Trout and Coho Salmon in the Rocky and Chagrin rivers.

8. We “hang 10” when it’s 10 below. It’s not a Hawaiian swell, but Lake Erie’s winter waves and gusty winds get surfers’ temperatures rising.

9. Cleveland rocks! Pigs flew at Pink Floyd’s Stadium show in ’94, Phish jammed Blossom in ’00, Bono belted out U2’s greatest hits at The Q in ’01, MMW’s jazz licks swirled the House of Blues in ’05, and the Black Keys played a secret show at The Beachland’s tavern in ’08. Whether it’s 80,000 people or 100 people, you can be sure Cleveland’s rock venues are on the tour itinerary.

10. We love to spend time with friends in the dark. The Cleveland International Film Festival is a ten-day festival acknowledged by Time magazine as a “must-see” and by the Academy Awards as an automatic qualifier for shorts.