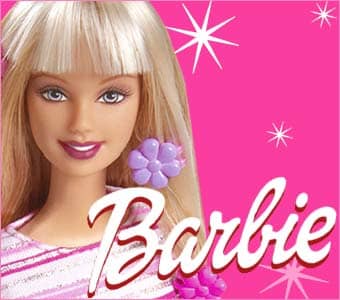 This boomer has not put on a pound, her breasts and behind are perkier than ever, and she still won’t be caught dead without her heels. I’ve got to get the name of her plastic surgeon, her trainer, and with clothes like that I wouldn’t mind her an afternoon with her personal shopper.

Ol’ Barb’s real name is Barbara Millicent Robert, and she was born on March 9, 1959 in Willows, Wisconsin, measuring a petite 11.4-inch’s. The hottie wowed the world when she made her debut at a New York toy fair, leading to sales of 300,000 that same year.Today she is at the center of the Mattel company empire. She has inspired dozens of fashion designers, become a presence on Facebook and MySpace, revolutionized playtime for young children — and forced untold numbers of reluctant parents to reach for their wallets.

NYC rolls out the pink carpet for Barbie

New York Fashion Week this month will fete her 50th with real-life leggy models, where “Fifty designers will be coming together for the first time in history to celebrate Barbie as an iconic figure in fashion. Presenting as a three generational fashion show (Past, Present and Future),” a statement from the organizers announced.There’s even a special wedding dress by Vera Wang that will be on sale for $15,000. For Barbie owners, or those without that kind of money, the same thing is available in miniature for $159.99 at Toys R Us on New York’s Times Square.

Pink-Carpet Events & Destinations
– First-ever Barbie Runway Show at Mercedes- Benz Fashion Week in New York: In celebration of Barbie’s® unparalleled fashion heritage, on February 14, 2009, 50 world-renowned fashion designers will come together for the first time ever and showcase real-size, Barbie-inspired looks at Mercedes-Benz Fashion Week in the Tent at Bryant Park. In this monumental fashion celebration – that only Barbie could host – designers will celebrate the past, present and future of fashion, as inspired by Barbie® doll, first launched in 1959 as the “Teenage Fashion Model.” Designer names will be announced in early February. (Runway show on February 14, 2009; to be webcast live on Barbie.com).

– Barbie’s Birthday Party at Her “Real” Malibu Dream House®: On March 9th (Barbie® doll’s actual birthday), event-planner-to-the-stars Colin Cowie will help throw Barbie® an outrageously pink birthday celebration at – where else – but a real Barbie® Malibu Dream House®, styled and decorated by famed “Happy Chic” interior designer Jonathan Adler. The newly designed “real” Dream House® (located on the beach in Malibu, Calif.) will play backdrop to what is sure to be the most talked about “pink-carpet” birthday bash of the year, where Barbie®’s closest famous friends from throughout the years will be invited to peek into the fashionista’s storied closet! (Barbie® Birthday Party on March 9, 2009 – by invitation only).

– Special Barbie™ Boutique & Exhibit at colette in Paris: Barbie® is celebrating her birthday all around the globe – including at one of the trendiest stores in the world, colette in Paris. As two icons of fashion and style come together, fashionistas will enjoy a special Barbie™ boutique featuring a capsule apparel collection “Barbie™ by Jeremy Scott”, which will include Scott’s iconic trench coat, dresses and tees, all done in fun Barbie® patterns and iconography. Additionally, colette has commissioned additional Barbie accessories for “grown up” Barbie® girls including a mobile phone, luxury jewelry, stationery, candles and cosmetics. Plus- they’ll be displaying the highly anticipated photos shot by Karl Lagerfeld of Barbie with model Baptiste Giabiconi as Ken that will be displayed and then sold as silkscreen prints! (March 9 – 28, open to the public)

– Barbie Shanghai Store: America’s favorite fashionista Barbie? doll has her sights set on Shanghai with the March 2009 grand opening of the brand’s first ever flagship store. This unprecedented store houses 1,500 square meters and six stories of Barbie® retail-tainment. It is the ultimate destination for girls of all ages to shop, dine, enjoy a day at the spa, and become a fashion designer or runway supermodel. (Soft opening in late January; official grand opening in early March 2009)

Hot Off the Press

To keep up with the latest news on dollface check out her blog.