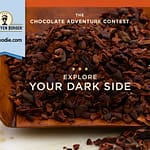 It’s rich. It’s indulgent. It’s dark. It’s delicious. It’s the Second Annual Scharffen Berger Chocolate Maker and TuttiFoodie.com “Chocolate Adventure Contest.” This contest calls for both amateur and professional chefs to submit their most ingenious recipes — pairing this year’s “adventure ingredients” with Scharffen Berger® chocolate in Sweet, Savory and Beverage categories. One grand prize winner in each category will win $5,000 and other prizes.

So whether you’re a cutting-edge cook with a taste for pairing diverse ingredients with fine artisan chocolate, or you’re a chocoholic like me who loves to experiment in the kitchen, you’re invited to enter a recipe.

The contest is a reflection of Scharffen Berger’s spirit of innovation, asking chocolate-lovers to think about chocolate in new and exciting ways. “When we started Scharffen Berger we were the first ones in the U.S. to focus on bringing out the intrinsic flavors of cacao in our chocolate, and the first to highlight the importance of cacao by featuring its percentage on our label,” says John Scharffenberger, co-founder. “Our goal was to enhance the way Americans thought about chocolate. We’re looking for that same forward-looking spirit in this recipe contest.”

Scharffen Berger Chocolate Maker is the first of the artisan “bean to bar” chocolate manufacturers established in the U.S. in the past 50 years. Bringing its founder’s expertise in winemaking to the art of selecting cocoa beans, the company has since led the explosive growth in the artisan chocolate category it created.

In addition to being the first American chocolate manufacturer to feature the percentage of cacao content on its labels, Scharffen Berger was also the first to sell cacao nibs, the dark, nut-like chunks of cacao beans that remain after roasting and shelling from which chocolate is made.

“The contest is the first artisan chocolate contest in the country, “said Lisa Schiffman, founder of TuttiFoodie.com and contest director. “And the first one to involve the kind of exotic ingredients that spark the adventurous cook’s imagination.”

Entries will be judged by a panel of celebrated chocolate experts, including cookbook authors Alice Medrich and Elizabeth Falkner, John Scharffenberger and TuttiFoodie.com’s Lisa Schiffman. Judging criteria include originality and creativity; taste; and ease of preparation.

The Grand Prize winner of each category will take home $5,000, a signed copy of The Essence of Chocolate by company founders John Scharffenberger and Robert Steinberg, Pure Dessert by Alice Medrich and Demolition Desserts by Elizabeth Falkner, and have their names and recipes announced on TuttiFoodie.com and in the Scharffen Berger e-newsletter.

The Chocolate Adventure contest will accept entries from October 1, 2008 through January 4, 2009 and is open to U.S. residents at least 18 years old. To enter online, and to view complete contest rules, visit www.chocolateadventurecontest.com. Entry forms and contest rules are also available by mail by writing to Chocolate Adventure Recipe Contest, c/o TuttiFoodie, 1714 Franklin Street #100-280, Oakland California 94612-3409. Mail-in entries must be postmarked by January 4, 2009 and received by January 15, 2009. Winners will be announced towards the end of February, 2009.