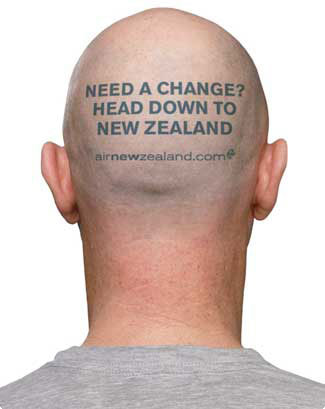 WHO: Air New Zealand invites Southern California residents to be considered for a 10-day gig as one of its 30 cranial billboards.

WHAT: Air New Zealand will hold a casting call to select 30 adults (18+) to serve as walking billboards for 10 days. The selected billboards will have their heads shaved and branded with a temporary henna tattoo. The tattoo will be visible for approximately 10 days (with one reapplication after five days) and read “Need a change? Head down to New Zealand. www.airnewzealand.com”. The message reflects Air New Zealand’s current “Depart a Californian. Return a Kiwi.” advertising campaign communicating the potential for a life-change.

Cranial billboards will be asked to go about their normal lives, attend their regular events and might be asked to fly on a major airline between Los Angeles and San Francisco, encouraging busy travellers to explore their need for change by heading down to New Zealand.

WHERE: Greenway Melrose Trading Post
Located in the parking lot at Fairfax High School
(Corner of Melrose and Fairfax)

ADMISSION: Free to media and casting call applicants. Applicants must be willing to shave their head and receive a temporary tattoo if selected. There is a $2 entrance fee to the Greenway Melrose Trading Post for others.