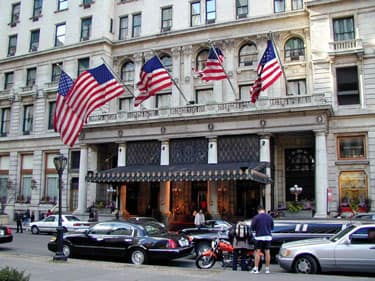 The Plaza Hotel in New York Luxury has been a great and luxurious landmark for more than 100 years. The Plaza Hotel has reopened recently, with some modern improvements but it retains its older charm at the same time. For the entire transformation, the hotel has spent a whopping $400 million. The result is that this reputed hotel bordering Central Park has received a fresh look and some much needed vitality.

You should not forget that this lovely hotel still maintains its old favorites such as the renowned Oak Room and Oak Bar, and the decadent style Beaux Arts décor.

The new renovation has resulted in 282 unique guestrooms, which include 102 lavish suites. Luxury in these rooms means gold plated Sherle Wagner accessories and faucets, white marble vanities finest Italian Mascioni bath towels, and much. Click here for the details.

You will recognize the hotel as the backdrop in shows like Gossip Girl and Sex and the City, but both these shows are just riding the coat tails of many famous movies and TV Shows (okay minus Bride Wars and Inside the Osmonds).