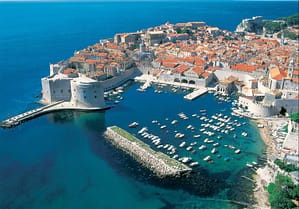 Originally known as Mare Superum (upper sea), the Adriatic Sea graces the shores of Italy, Croatia, Bosnia and Herzegovina, and Slovenia. Eleven major rivers make the journey to greet this beautiful sea, just as the ancient Romans had. The Adriatic Sea continues to provide rest, rejuvenation, and romance to those who seek her company today.

The enchanted city of Dubrovnik, Croatia so captured the heart of George Bernard Shaw that he professed his feelings unabashedly when he proclaimed, “If you want to see heaven on earth, come to Dubrovnik.” Located on the southern coast of Croatia, it has been dubbed the “jewel of the Adriatic.” Dating back to the 13th century, this preserved medieval city glistens with marble-paved streets that lead to meticulously restored churches and palaces.

Meander hand-in-hand down the very path shared by lovers long ago. Later, allow the sun to caress your body as you recline on the water’s edge at either Copacabana Beach, known for water activities or Banje Beach deemed the most beautiful beach in all of Croatia. Explore the many islands of Croatia by ferry, or rent a boat and create your own adventure. Accommodations range from the earthiness of camping, to the luxury of several 5 star hotels.

On the western side of the Adriatic Sea lies a frequently overlooked destination. The smallest province of Italy, Trieste beckons travellers to explore its cultural riches. Walk along the very paths that James Joyce trod when he lived, taught and wrote in this tiny mecca.

Away from the crowds, time will seem to slow, as you amble down the streets of town pause to admire the ancient architecture, savor fresh-baked pastries and sip some local wine. Just beyond the city you will find Grotta Giante, listed in the Guinness Book of World Records as the biggest tourist cave in the world. Then on to Castle of Miramare, built in 1856, the architecture, the location and views will stir the imagination. The rare exotic trees that surround the castle will tantalize the senses. Take time to travel the surrounding countryside and visit the local farms that can offer you an authentic taste of local cuisine, with their wares of home-made cheeses, salami and other delights. Before departing the town, consider an evening stroll to the water’s edge, and share a kiss in the Italian moonlight, as you are in one of Italy’s safest cities.