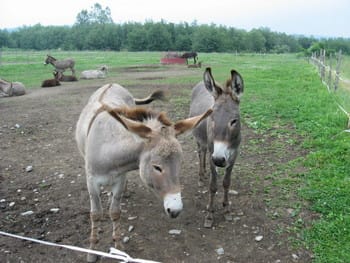 Le Seigneur des Agneaux began life five years ago as a sheep farm until Annick Balayer was bitten by the donkey-bug which happened quite by accident. Her precious sheep were being killed by the coyote,so she brought in a couple of donkeys to protect them and it was love at first bray. Now Annick and her family are the only donkey breeders in Canada, and after spending an hour listening to her donkey lore, touring the farm and interacting with her herd of donkeys you’ll be hooked too. You’ll learn all sorts of interesting facts about the world of donkeys—such as the reason people think they are stubborn is because they won’t come when being pulled…but all you have to do is push them instead. She extols their many virtues and uses: They are natural protectors, have a great sense of humor (I’m not kidding-ask her to tell you the story about how one of them hid her keys when she had been ignoring them) using their milk to make a unique, healing soap, and because of their kind, trusting natures she invites children with special needs to spend time with them. She’ll pack up your favorite donkey for a hike in the woods but make sure you come back in time to enjoy their 3 course “Sheppard’s lunch” made with their farm-fresh lamb bacon, pate or sausage followed with a caramel or chocolate dessert made from donkey milk.

You’ll sniff out the way to your next destination long before you arrive at Bleu Lavande, a wonderland of over 200,000 lavender plants. Ask owner Pierre Pellerin, to tell you his inspiring Rocky Balboa-ish tale of how he refused to give up on his lavender scented dream, as he takes you on a tour of the farm, where you can visit the interpretation center to learn about the history and farming of lavender, the distillery where the certified 100% true lavender essential oil is extracted and the expansive boutique, which features a variety of lavender products

Take one out-dated summer camp strategically located in a private reserve perched over the scenic Lac Gale, throw in a visionary couple plus a few million dollars and voila…you get Balnea, one gorgeous high-caliber spa offering wonderful treatments from around the world. The spa menu tempts with panoramic outdoor saltwater whirlpool baths of varying degrees, a dry Finnish bath, hot Turkish steam room, ice-cold plunge pool, even a sweat lodge, which are all surrounded by heated terraces, (perfect for their yoga classes) waterfalls and forest ponds. A roster of massages and body/facial treatments will ensure that you leave in a state of bliss.

I give two thumbs up to Aux Jardins Champetres for both my fave eatery and sleepery since it combines a cozy antique filled country inn, with a sumptuous garden restaurant that features sophisticated artisnal food. 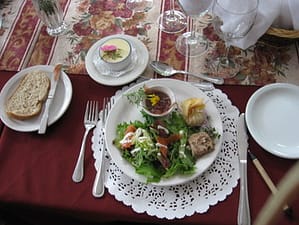 Two caveats: It’s BYOB (which presents a perfect opportunity to try some of the bottles you’ve picked up at the nabe wineries,) and they offer only a handful of rooms so I’d suggest reserving ahead.

After spending a few laid-back days exploring this delightful area I feel like I had only scratched the surface and am already planning a return visit this fall—that is if I don’t land in jail after trying to get through customs with foie gras, lamb pate, monk’s cheese and ice wine—just kidding…….kind of.

P.s. There are tons of other foodie attractions – wineries, cheese shops, farmers’ markets – way too numerous to list. Luckily they are all catalogued in the Eastern Townships’ tourist guidebook, given out for free at information centers, shops and inns or else you could contact