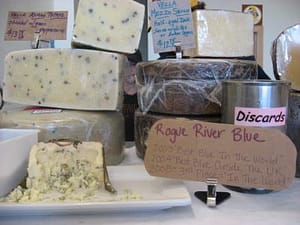 *Cary’s of Oregon –is known for making the “best toffee on earth” and I’d say he could easily change that to “in the whole universe”. Is it the soft crunch that makes it so addictive? Or perhaps it’s the farm fresh creamy butter, with just the right dash of salt to prevent over-sweetness? Maybe it’s he dark chocolate coating covering the perfectly toasted almonds? I couldn’t begin to tell, but I would just issue one warning: whatever size box you open up to try, trust me, it will be gone in one sitting. Ask to meet Cary, an appealing engineer turned candymaker seven years ago, who still gets a little teary- eyed when he tells you that last year Rachel Ray chose his toffee as her favorite snack food.

*Rogue Creamery: The first, the best and you’ll-kick-yourself-if-you-don’t-bring-a-cooler- with-you to take some home, Smokey Blue Cheese. This complex, creamy blue-velvet cheese is lightly smoked for 16 hours over hazelnut shells. Although owners David Gremmels and Cary Bryant, make other excellent blues: Crater Lake Blue, Oregon Blue Vein, Oregonzola, and their Rogue River Blue, which is wrapped in brandy-soaked syrah and zinfandel grape leaves, but after one sample of Ol’ Smokey, which won the 2005 Best New Product at the NASFT Summer Fancy Food Show in New York City, I’m hooked for life.
Their friendly jammed-pack store also offers a variety of other cheeses
and locally-produced salami, baked goods, and preserves—perfect for all your picnicking needs.

*Lillibelle Farms
Not only is it geographically desirable (right next door to the Rogue Creamery) but a selection of Lillibelle’s ever-changing roster of artisan chocolates, such as their berry cordials,(using only raspberries, strawberries or marionberries from their organic farm,) delicate bonbons, and truffles provides the perfect ending to any meal. The tall, ponytailed rockstar of the chocolate industry, owner, Jeff Shepherd, is as original as his flavors. Just a few of the temptresses include a mouthwatering espresso ganache, chocolate covered marzipan figs, and a lavender Fleur de Sel, Some of his hottest sellers may sound weird, but after on bite of Jeff’s spicy Cayenne Caramels, Black Pepper Truffles , or his Smokey Blue Truffle, a “you gotta try it to believe it” pairing of organic Chocolate and Rogue cheese will have you joining his illustrious fan base alongside Tom Petty, Bob Dylan and the Grateful Dead.

*FYI :
– You’ll find local Gary West Smoked Meats carried at most supermarkets and you should always have a stash of their Certified Angus Beef Jerky in the car to stave off any hunger pangs.

-The pear is Oregon’s state fruit and they are big and juicy- which might be why Harry & David’s headquarters are in Medford.

-Two very cool sounding places to spend a night-although I didn’t have time to see them- are: the Umpqua Lighthouse State Park that has six deluxe yurts for rent, or the Out’n’About Treehouse resort in Cave Junction, where you can actually relax in a claw-foot tub up in the trees.

– Shout out to all Chochoholics …you do not want to miss the Oregon Chocolate Festival held in Ashland, March 6-8. It’s the BEST of everything chocolate with over 2 dozen local chocolatiers, chocolate based menus, chocolate wine and beer pairings.

– And just so you won’t go around embarrassing yourself, let’s all practice together… it’s pronounced OR-UH- (rhymes with DUH) GUN.

One Response to Following The Butcher, The Baker, and The Winemaker’s Trail :: Southern Oregon, pt. 6