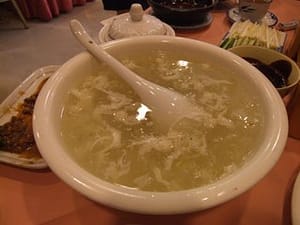 Talking about some rare delicacies, have you tasted the bird’s nest soup? This rare soup features among the most desirable delicacies in Asia. The gelatinous mixture of the soup looks very simple and it rests on a chicken broth. However, when you look at the contents of the soup closely, you may not find it to be as simple as it looks.

The main ingredient in this delicacy is actually bird’s nest. The nest is not comprised of leaves and twigs, as you would imagine, but it is small swiftlet’s nest, made of saliva mainly. A male swiftlet builds the entire nest in just thirty-five days to make place for about two eggs in the shallow structure.

The nests are removed after the swiftlets are able to raise their young. The nests are found in native caves, which make it quite difficult for climbers to get them. This explains why the nest soup is such a luxury. Click here to discover more about the soup.